Go to Course Home
Muscles of the Body

There are almost 700 muscles in the body, which can make up almost half of your body weight.

The body consists of nearly 700 muscles and these can account for approximately 50% of body weight.  They have 3 specific roles:

Every movement that we make requires the co-ordination of several muscles and the system is also responsible in part in the transfer of fluid (these include urine, blood, and lymph)

To maintain our correct posture in standing upright muscle fibres create the conditions of rigidity and the correct tension.

The muscle is made up the following:

The muscles themselves are composed of fibre bundles called FASCICULI, they are encircled by connective tissue sheaths the entire muscle is then enclosed in the outer layer called the epimysium.

The perimysium surrounds collective bundles of muscles, whilst the endomysium surrounds the individual muscle fibre. This layer contains blood capillaries that supply blood containing oxygen and nutrients and remove waste products. These layers extend beyond the muscle fibres and become tendons or aponeuroses and attach muscle to bone.

There are 3 main types of Muscle:

Voluntary (skeletal) muscles consist of mainly muscle fibres, each of which is enclosed in connective tissue called the endomysium. Most voluntary muscles are made up of fast-twitch fibres which react quickly but also tire easily, and slow-twitch fibres which have greater endurance. Voluntary muscles contract if a stimulus is received from a motor nerve and they are all attached to the skeleton.

Involuntary (smooth) muscles are not under the control of conscious part of the brain and are found in the walls of hollow organs such as the stomach. These muscles are controlled by the autonomic nervous system and therefore work below the level of consciousness.

The muscle cells are spindle shaped and tapered at one end, with each cell containing a central nucleus. These muscles are controlled and contract in response to nerve impulses and neurotransmitters, and some by autorhythmic cells (self-excitable)

The cardiac muscle contrasts to create the pumping action required for blood flow. These contractions are automatic and never tire and are regulated by nerves and hormones such as adrenaline.

It is branched in structure and has disc between each muscle cell. It Is an involuntary muscle, regulated by the autonomic nervous system and its own pacemaker, the sinoatrial node. It cannot work with oxygen, and a shortage will create pain, muscle spasm and cardiac arrest.

Muscle attachments are known as origins and insertions. The end of the muscle closet to the centre of the body is the origin and is fixed, whilst insertion is further away and moveable. Origins are shorter and broader, whilst insertions are longer and denser. On contraction, the insertion generally moves towards the origin.

Muscle contraction is the ability to shorten and thicken. The speed at which they do can vary depending on the type of muscle it is. Voluntary muscles move by a stimulus from the brain. Each muscle fibre is connected to a fibre of a nerve cell which ends in a motor point where the stimulus is given, likely a tiny electrical current. When an impulse is received, the motor nerve fibre secretes a substance called acetylcholine which stimulates the muscle to contract.

The energy required to perform a muscle contraction comes from carbohydrates. Glucose, the smallest form of carbohydrate, is converted into glycogen which is broken down in the presence of oxygen during a contraction and energy is released enabling the muscle to move.

An adequate blood supply is essential if the muscles are to carry out their movements. A lack of oxygen and nutrients will result in muscle cramp, which is a painful spasm. 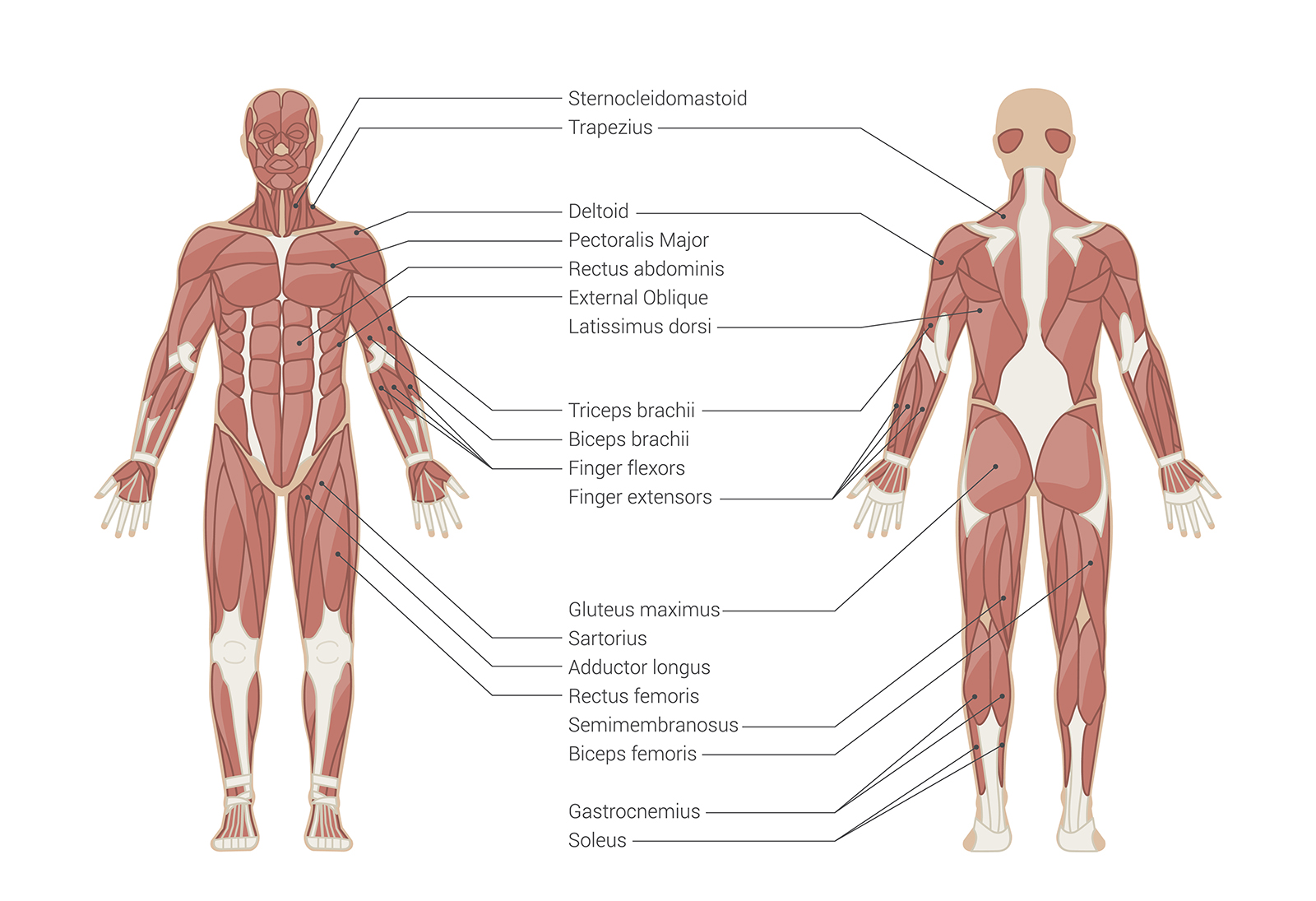