The dermis is the middle layer of the three layers of skin. It is located between the epidermis and the subcutaneous tissue. It contains connective tissue, blood capillaries, oil and sweat glands, nerve endings, and hair follicles. The dermis is split into two parts—the papillary dermis, which is the thin, upper layer, and the reticular dermis, which is the thick, lower layer. The thickness of the dermis varies depending on its location on the body. On the eyelids, it is 0.6 mm thick. On the back, the palms of hands, and the soles of feet it is 3 mm thick.

This is the supportive layer beneath the epidermis, and it is composed of connective tissues that contains both collagen and elastic fibres. It contains many different cells and structures:

Fibroblasts– which are large, flat cells that synthesize the following fibres.

The dermis can be divided into 2 layers: 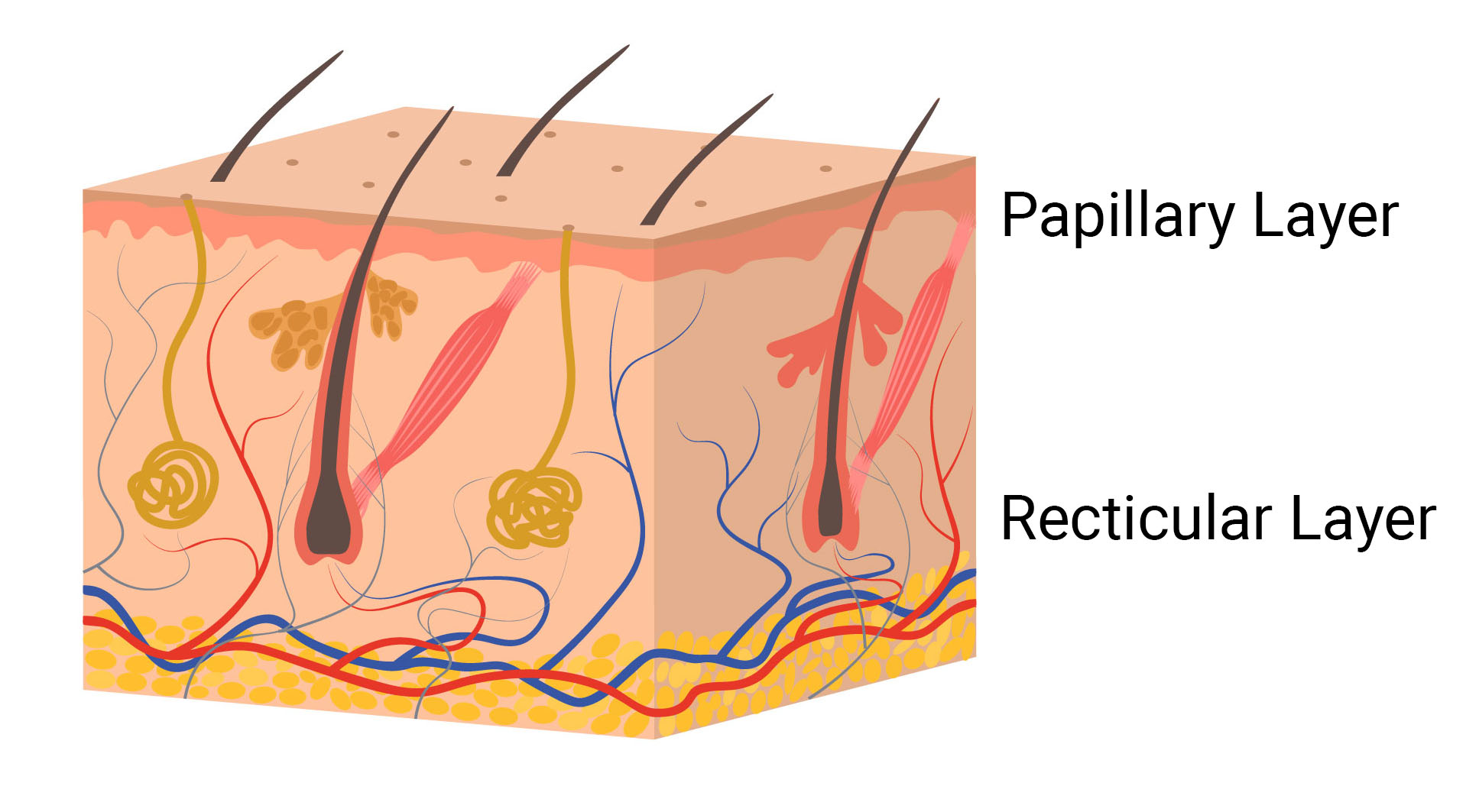 The papillary layer is made of loose, areolar connective tissue, which means the collagen and elastin fibres of this layer form a loose mesh. This superficial layer of the dermis projects into the stratum basale of the epidermis to form finger-like dermal papillae. Within the papillary layer are fibroblasts, a small number of fat cells (adipocytes), and an abundance of small blood vessels. In addition, the papillary layer contains phagocytes, defensive cells that help fight bacteria or other infections that have breached the skin. This layer also contains lymphatic capillaries, nerve fibres, and touch receptors called the Meissner corpuscles.

Underlying the papillary layer is the much thicker reticular layer, composed of dense, irregular connective tissue. This layer is well vascularized and has a rich sensory and sympathetic nerve supply. The reticular layer appears reticulated (net-like) due to a tight meshwork of fibres. Elastin fibres provide some elasticity to the skin, enabling movement. Collagen fibres provide structure and tensile strength, with strands of collagen extending into both the papillary layer and the hypodermis. In addition, collagen binds water to keep the skin hydrated. Collagen injections and Retin-A creams help restore the skin by either introducing collagen externally or stimulating blood flow and repair of the dermis, respectively.